As All-American a town as there is to be found, Goose Creek is a close-knit community of 36,000 with plenty of small town southern charm. Home to the Charleston Naval Weapons Station, a part of the larger Joint Base Charleston, Goose Creek is also appreciated by the more than 11,000 employees working there. 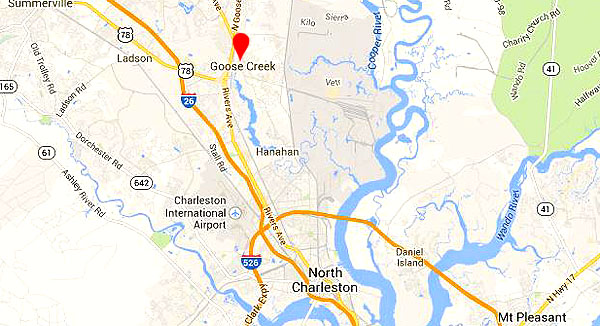 Originally commissioned in 1941 as the U.S. Naval Ammunition Depot, the Weapons Station on the west banks of the Cooper River was instrumental in World War II as an ammunition distribution point. Munitions shipped there would be loaded onto ships produced at the Charleston Naval Shipyard just down the river in North Charleston.

After World War II, activity at the base slowed until the mid-1950s when it began to arm and later produce guided missiles. Since then, the base’s mission has grown to include a variety of high tech Navy and Army training operations as well as serving as a logistics hub for the U.S. Army.

The area was home to numerous rice and indigo plantations in the 18th and 19th centuries including Crowfield, Yeamans Hall, Liberty Hall and Black River. Likely dubbed Goose Creek for the many curves of the creek that resemble a goose’s neck, men from the area were referred to “Goose Creek men” as early as the 1690s and were leaders in trade with Native Americans and in colonial government. The town was incorporated in 1961.

Offering some of the best values to be found in Charleston real estate, the town provides homes of virtually every type and price point. Amenities offered by the city include an outstanding recreation program with parks, swimming pools, Crowfield golf course and activity programs for all ages. Several outstanding subdivisions such as Crowfield Plantation and Montague Plantation offer homes with community pools, water views, and landscaped streets.

Just minutes away is the 60,000-acre Lake Moultrie, a prime spot for fishing and boating. Less than 30 miles away are some of the best beaches on the planet at the Isle of Palms and Sullivan’s Island. Add to this the cultural events, nearby coliseum and many other things to do in Charleston, and this might be the perfect place for your home search to begin.  Call us today for more information or to tour the city.

Don't miss this incredible opportunity in Persimmon Hill! This move-in ready townhome has a great floorplan and amenities. This wonderful townhome welcomes you as you ent...

This special home is located in the highly desirable Cadbury section of Crowfield on a hard to find lot that backs to wooded wetlands. Close to shopping, Naval Weapons St...

Welcome to ''Briarwood'', a quiet neighborhood close to everything! Conveniently located close to shopping, restaurants, entertainment, and just minutes away from the nav...

Welcome to Foxborough Townhomes, centrally located in the heart of Goose Creek's business district and the I-26/Hwy 52/176 & 17A Corridor - Close to Boeing Aeronautical, ...

Nicely renovated 2 story home located on a high lot with an in-ground pool, fully fenced yard in one of Goose Creeks premier neighborhoods...Crowfield Plantation. Inside ...

With all the convenience of everything you may need, country living is just minutes away. Simply the best of both worlds. This modular home sits on a sturdy brick foundat...