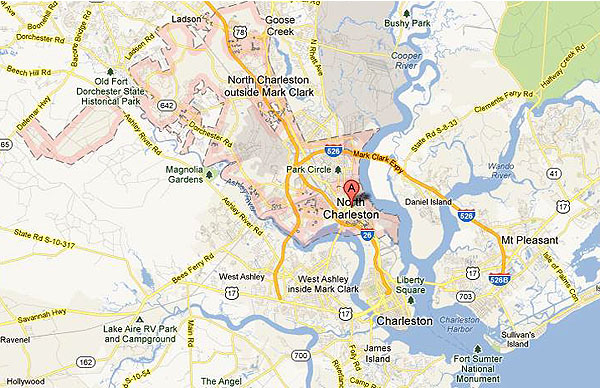 Today's North Charleston is the 3rd largest city in South Carolina, one of its major industrial hubs, and is THE major retail center for the state. Consisting of about 77 square miles, there's a lot of industry, corporate offices, and money in that mileage.

Before there was a city, the area consisted of many large plantations, including Archdale Hall, Elms, Camp Plantation, and Windsor Hill. After the Civil War, most plantations collapsed, and North Charleston's predecessors were no different. The Ashley River provided a new industry - phosphate fertilizer - and one of the main thoroughfares in the city began as Ashley Phosphate Road, transporting the phosphates out of the strip mines. Charleston community leaders set out to have its industrial areas set apart from its gentile residential areas, and it also supported lumber, a naval shipyard, and an asbestos and rubber company.

In the early 1900's, an area known as Park Circle was designed and developed for commercial and residential use. It was one of only two communities in the United States to be planned in an "English Garden Style". This area remains today as one of the most well-known, where employees can live close to where they work. Eventually the residents of this large north area outside Charleston banned together to incorporate and form their own city of North Charleston in 1972.

By 1976 they had annexed the Naval base, several industries, the air force base, and the Charleston Internation Airport, making it nearly as large a city as its parent Charleston, and quite the income producing mecca. In the 1990's Boeing Aircraft opened its doors, and set the city up as one of the major aircraft centers of the world, as well as providing thousands of new high-paying jobs for the residents.

Today North Charleston boasts several excellant hospitals and medical facilities, a coliseum and Performing Arts Center which hosts Broadway shows and national musical/theatric productions. Given its size, industry, and history, the city offers real estate and homes in every conceivable form, from small homes and condos to multi-million dollar estates overlooking the river or ocean. Explore our sections of neighborhoods, or let us show you around the city. We'll find the perfect home for your needs.

FOUR BUILDABLE VACANT LOTS IN A ROW! These lots were originally two lots, and the current seller has split them into 4 lots. Total area is 0.78 acres. Lots are just minut...

Welcome home to 7953 Kittery Avenue in Colony North. This charming home is being sold ''As Is''. This three bedroom, two bath ranch offers a very open living area and a h...

Experience luxury living in this stunning custom-built home in the prestigious Coosaw Creek Country Club. Conveniently located within 10 minutes of the CHS International ...

Don't miss our Ashley Hall! Our townhomes are built with the 1st floor guest suite along with an attached 2-car garage with a private driveway. Each home includes a firep...

Our townhomes are built with the 1st floor guest suite along with an attached 2-car garage with a private driveway. Each home includes a fireplace, hard surface flooring ...

Don't miss this stunning END UNIT! Our townhomes are built with the 1st floor guest suite along with an attached 2-car garage with a private driveway. Each home includes ...

Don't miss our Middleton floorplan featuring 4 bedrooms with 4.5 baths!!! Our townhomes are built with the 1st floor guest suite along with an attached 2-car garage with...

Don't miss our Middleton floorplan featuring 4 bedrooms with 4.5 baths!!! Our townhomes are built with the 1st floor guest suite along with an attached 2-car garage with...