Getting caught in traffic is never an excuse for running late on Dewees Island, just north of the Isle of Palms and 12 miles north of Charleston as the crow flies. But then again, the island has no automobiles. Accessible only by boat, the automobile-free island has gained national attention as one of the country’s most environmentally-sensitive and sustainable developments.

With building covenants limiting the number of homes on the 1,206-acre island to 150, each home must also meet a stringent set of construction and design guidelines to minimize its impact on the wildlife. And while Dewees does have five paved roads for foot and golf cart traffic, those roads aren’t paved with asphalt but crushed limestone instead. The island’s developers also utilize an advanced recycling and composting system, with a reverse osmosis system meeting the entire island resident’s water needs. 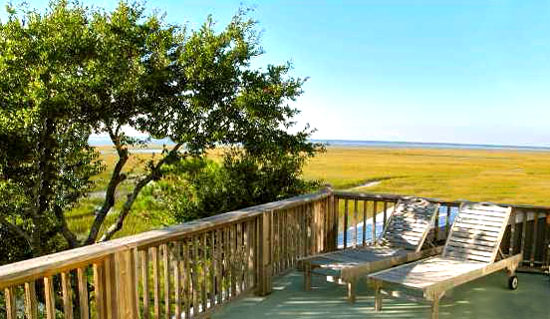 Largely used over the years for the production of indigo, rice and cotton, the island didn't see much development until the 1970s when a few vacation homes began to be built. In 1991, the Island Preservation Partnership was formed to develop the island. When eventually built out, 95% of the island will still be in its native state.

While there is no minimum size for homes here, the maximum size is 5,000 square feet, and builders are allowed to disturb no more than 7,500 square feet of each lot during construction. To further limit the environmental impact, lawns are not allowed and homes are surrounded by and landscaped with native vegetation. The houses on Dewees are elevated and all feature water views of some type, whether a large tidal creek, lakes, the Intracoastal Waterway or Atlantic Ocean. 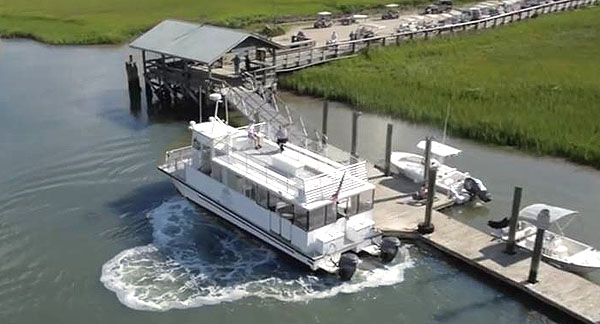 Access to the island is by the Aggie Gray ferry that runs hourly and on demand from the Isle of Palms, although many Dewees homeowners maintain their own docks and boats. The island offers a variety of property options, with a 25 percent fractional ownership in homes starting in the low $200s and some lots available under $100K. On the upper end of the scale are homes and oceanfront lots priced at $2 million and more.

If you are looking to live with nature and leave cars and traffic behind, this may be a once in a lifetime opportunity to live on the next best thing as your own private island. A MUST SEE. Call us to tour this unique island city.

Unequivocally the best value on Dewees Island. This oceanfront estate listed on the extraordinary and privateThe open floor plan invites you to relax and enjoy the sound...

This is a rare 1-acre ocean-front lot with gorgeous, unobstructed views ocean views. Dewees Island is a one-of-a-kind paradise for those wanting peace and tranquility in ...

This masterfully designed home is a collaboration between Mudpaw Builders and renowned Charleston architect, Tyler A. Smyth. The property will consist of 2669 SF of heate...

Rare Charleston area oceanfront lot! Turn this beautiful shore line into your backyard. This exceptional 2.36 acres of oceanfront land is on prestigious Dewees Island. A ...

Oceanfront living at its finest! 255 Pelican Flight has sweeping views of the Atlantic and located on a private beach. Enjoy the quiet natural landscape of sea oats and p...

1.55 Acres, the homesite has been marked & the home design approved by the ARB. The survey and soil test are also complete. Designed by renowned architect Tyler Smyth. Th...